In 1992, members of the School Board at Pilgrim Lutheran School in Beaverton began discussing ways to bring more students to their classrooms. Members of the Pilgrim Board made a series of presentations to other Missouri Synod Lutheran congregations including Trinity and Zion, Hillsboro, Mt. Olive, Forest Grove, St. Peter’s, Cornelius, Bethlehem, Aloha and Prince of Peace in the Sunset area of Beaverton.

Out of these meetings grew an interest in combining forces to support Christian education through Lutheran schools. The Pilgrim Board invited representatives of these other congregations to meet monthly to discuss how this cooperation could be facilitated.

In 1993, Dan Seim, principal at Pilgrim and Bonnie Busacker (Moeller), 5th-6th grade teacher, were invited to visit the facilities of Good Shepherd Home of the West, south of Cornelius by Chaplain Kachmarek.  Good Shepherd was in the process of relocating its developmentally disabled residents to group homes in the area and was open to leasing its campus to other organizations. The buildings there had been constructed on a 12-acre campus in the early 70’s and were built to house 85 residents in several residence buildings, an office and classroom building and several other support structures.

The study committee focused on the possibility of opening a second Lutheran school on the Good Shepherd campus as a sister school to Pilgrim. There was discussion of an Association which could operate both schools jointly. The committee began serious discussions with representative of Good Shepherd to lease facilities with options for eventually working out a purchase agreement. At the same time, another group was drafting Articles of Incorporation and Bylaws for the Westside Lutheran School Association. Surveys indicated that a dozen or more Pilgrim students would enroll at the new school because it was closer to their homes. It was felt others would enroll from the community and from Lutheran congregations close to the school. 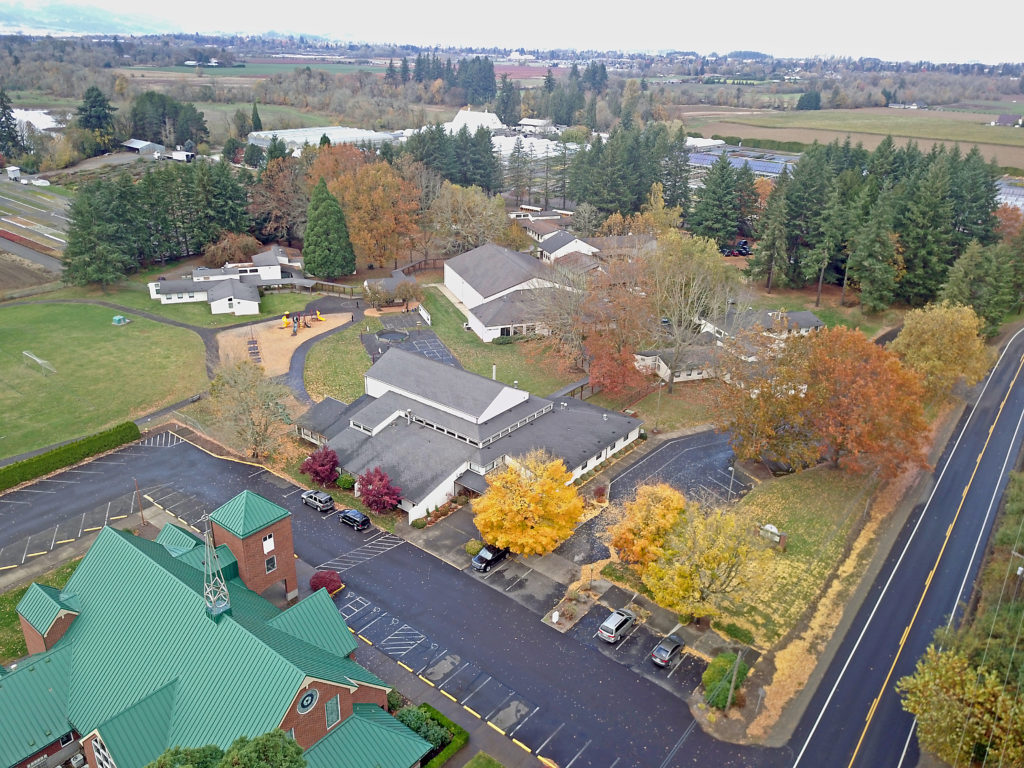 The Opening of Forest Hills

In the Spring of 1994, the movement had grown and plans were being laid to open a new school. Eight LCMS congregations passed resolutions to join the Association, provide initial financial support, and assist in recruiting students for one of the two Lutheran schools.

In June, 1994, Pastor Warren Schumacher of Trinity, Hillsboro, led an opening devotion at the initial Delegate Assembly of the Westside Lutheran School Association in the multipurpose room at Good Shepherd. The group resolved to call the new school Forest Hills Lutheran School, (Tualatin Valley Lutheran School and Blooming Lutheran School were other suggestions) to open with grades K-8 in five classrooms on the campus, and to elect a Board of Directors to carry on with organizational decisions for the new school.

By September, 1994, the Board had appointed teachers – Elaine Spidal, 1st-2nd grades, Bonnie Busacker, 3rd-4th, Tammy Frerichs, 5th-6th, and Rich Bolton, 7th-8th grades. Sandy Hoffman was the last to be appointed to teach kindergarten. Dan Seim continued to provide administration to both Pilgrim and Forest Hills, commuting between the schools on a daily basis. When the doors opened on the first day, forty-eight students reported for classes.

With small classes and the prospect of a new program with a bright future, Forest Hills completed its first year. By the time the doors opened for the second year, enrollment had nearly doubled to 92 students. The first and second grades were split and Sarah Hoffman was added to the staff to teach the second grade. Renovations were made to one of the residence buildings and upper grade classes were relocated to a second building on the campus.

Serious negotiations began with representatives of Good Shepherd to purchase the campus. With support from local Good Shepherd Board members, the California-based organization agreed to sell the campus to the Westside Lutheran School Association for a selling price of $750,000. Several major memorials provided the Association with nearly $100,000 in down payment funds. The agreement was finalized in March, 1997. The Head Start program continued to lease several areas of the campus but now the landlord was the WLSA.

After three years of sharing an administrator, Pilgrim decided they needed additional administrative support and ended the agreement between the two organizations. Dan Seim continued as full-time principal at Forest Hills and Executive Director of the Westside Lutheran School Association.

In the third year of operation, Forest Hills grew to 132 students and split the 3rd-4th and 5th-6th combination classes. Carolyn Sellke and Scott Nelson joined the teaching staff. Two years later the 7th and 8th grades were split and Phyllis Nistad became the 9th Forest Hills teacher. Each grade was in its own classroom and the school had expanded into the third building on the campus. Enrollment climbed to 175 students in the 6th year of the school’s operations.

In 1998, Vince and Elaine Dobbin, presented the school with a $650,000 gift with which to build a new gym and music building.

In 1999, the estate of Mel Hering was presented to Forest Hills Lutheran School. The Forest Hills Endowment Fund benefited from the estate with a half million dollars, earmarked for capital improvements. Another half million dollars went to the FHLSA endowment fund for financial aid to needy students. New siding, septic system renovations, furnaces, classroom carpeting, plumbing, and roofing improvements were made possible through these funds and gifts from school friends over the past several years.

The gym and music building was officially dedicated as the Dobbin Center on March 20, 2002.  In 2004 the library was relocated to the multipurpose room in the Main Building and dedicated after major renovations as the Seim Learning Center. In 2009 the Dobbin Family again generously gifted the school with funds that were used to expand the kitchen building and add a dining hall. 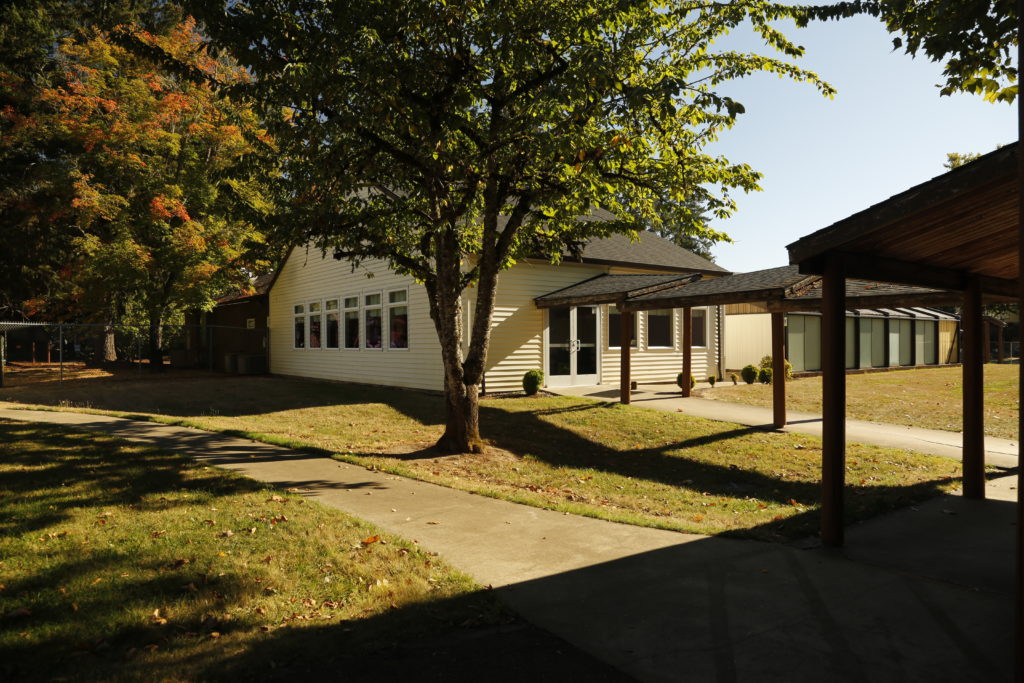 In 2014 the school’s name was changed to Forest Hills Lutheran Christian School to reflect the inclusiveness of the Forest Hills community. In the Fall of 2015, the Middle School building was remodeled.

Currently, the campus is undergoing another exciting transformation. Our former intermediate building, in part one of a multi-phase plan, has been demolished to make way for the next generation of Forest Hills. Plans are underway and we look forward to showcasing our new intermediate building as progress continues and up until completion. Like and subscribe to our Facebook and Instagram for more exciting updates! 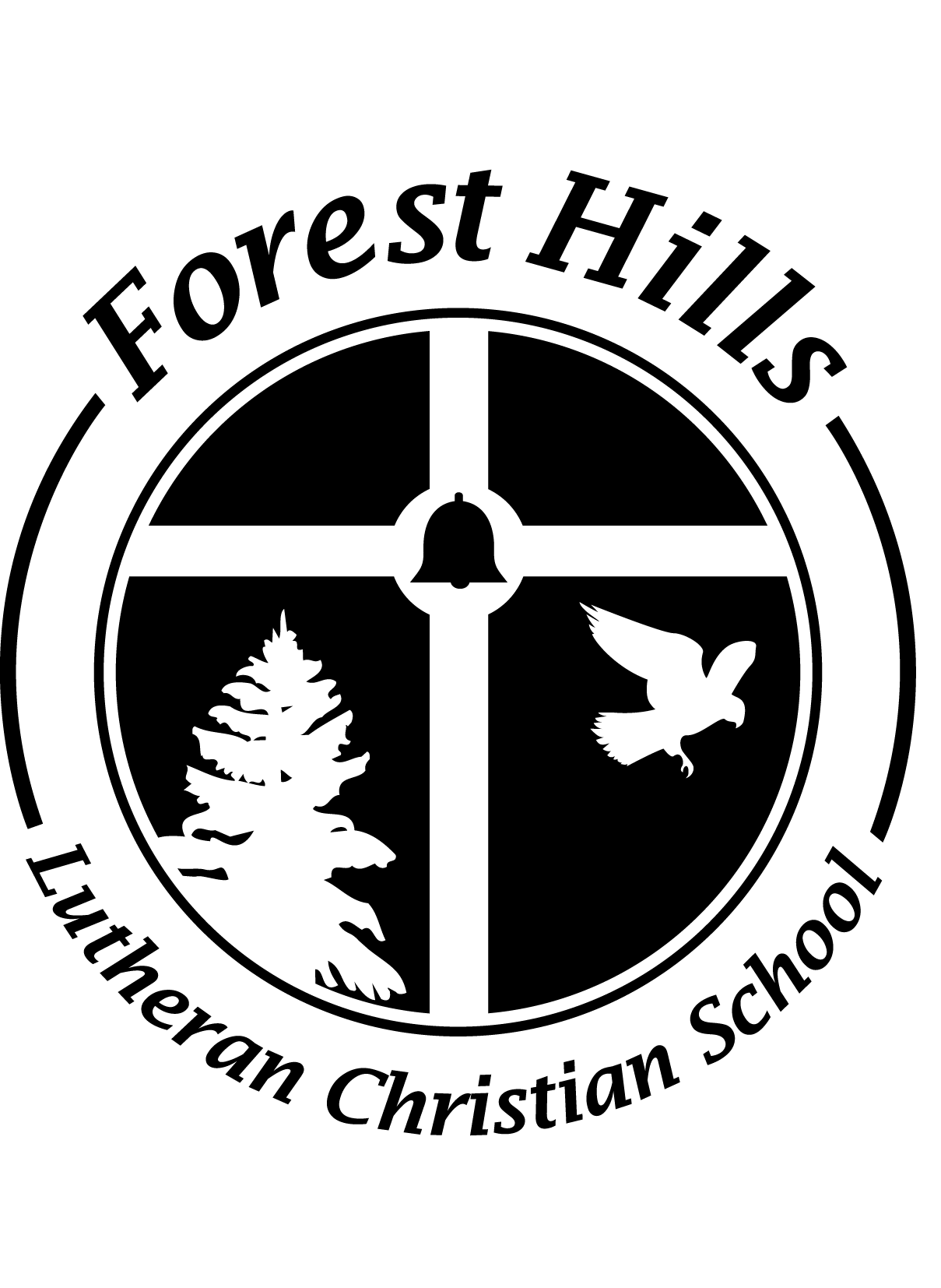